Measurement and Estimation of Bicycle and Rider Physical Parameters 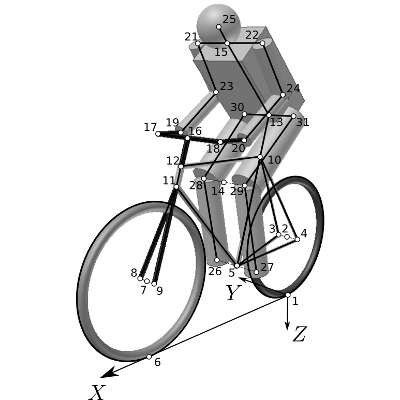 The purpose of this research is to establish methods for measuring and estimating the physical parameters of bicycles and bicycle riders necessary for simulating models of the bicycle-rider system.

In [Moore2008] we developed and used a method for estimating the inertial properties of the bicycle and rider given simple geometric measurements. The rider method in [Moore2008] was formalized in [Moore2009] and combined with more accurate measures and estimates of the bicycle's physical parameters based on the methods used in [Kooijman2006]. We presented estimates of the physical parameters of several different styles of bicycles in [Moore2010] and compared their resulting dynamics. Then in [Moore2012] the prior work was further refined and included measurements of additional bicycles and a new method for estimating the rider's inertial parameters. The generalized human inertia estimation method used in [Moore2012] was published in [Dembia2015]. The software [Moore2011] used for the computations has been developed over the years and basic functionality is now available in a freely accessible web application:

Screenshot of the bicycle dynamics web app. Click the image to go to the app at https://bicycleparameters.herokuapp.com.