Finding the Efficiency of the Xylem and Money Maker Treadle Pumps 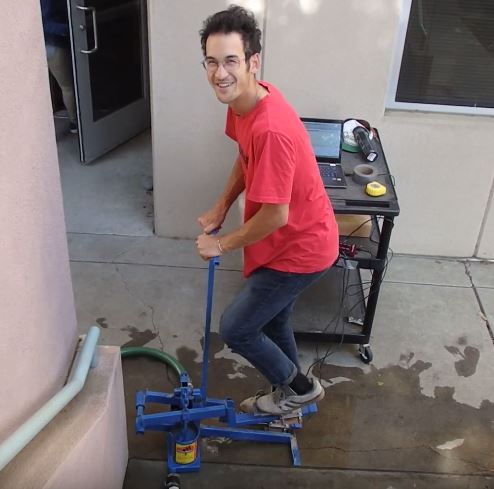 Figure 1. A user "treadles" on the Money Maker treadle pump.

The treadle pump is an inexpensive and portable irrigation tool. According to International Development Enterprises (IDE), treadle pumps helped farmers in Bangladesh increase their income by an average of $100 a year. This increase in profit allowed farmers to invest in larger, more expensive irrigation machines that further increased crop yields and helped create financial stability [Polak].

A prototype pedal-powered centrifugal water pump was tested by Abe McKay during his Master’s studies [McKay]. Mckay’s tests suggested that this pump’s efficiency was comparable to that of the commercially available Xylem and Money Maker treadle pumps. Detailed efficiency data for these treadle pumps are not available and thus an accurate comparison could not be made until now.

McKay had conducted an efficiency test with the centrifugal pump so our goal was to conduct a similar test with our treadle pumps in order to produce data that could be compared. We conducted fifteen tests, with three replicates at each pressure head between 1 and 5 meters. We pumped 20 liters of water for each test. We measured time using a photoresistor that was covered and uncovered (on/off) to record the beginning and end of each test. The DAQ apparatus including photoresistor circuit, sensor wires, and LabJack is shown in Figure 2 below. 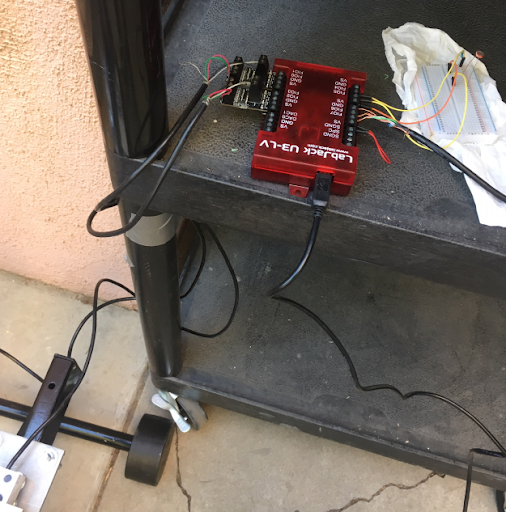 Figure 2. The LabJack was kept dry and out of danger behind the treadle pump. 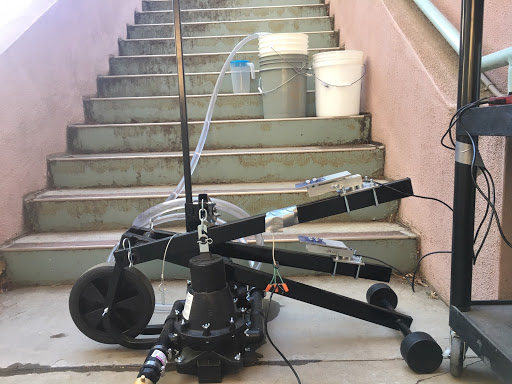 We measure force and angular rate using the force sensors and the angular rate gyro respectively. Using our force measurements, we were able to calculate torque using the equation below:

where \(F\) is the force in Newtons applied to the lever arm perpendicular to the arm. The radius \(r\) is the distance from the point of applied force to the lever arm’s center of rotation. Using torque and angular rate measurements from the angular rate gyro, power in watts is calculated using the equation below:

where torque 𝛕 is in Newton-meters and angular velocity 𝛚 is in radians per second. Time required to fill the 20 liter bucket was measured and used to calculate flow rate. Hydraulic power could then be calculated using the equation:

Simplifying for water, where density equals 1 kilogram per liter:

Hydraulic power is adjusted using this estimated friction head. A Hazen efficiency can then determined.

Each test began with one person priming the pump in order to achieve consistent water flow. The collector would deliver the pumped water into an overflow bucket until the experiment began. At the start of the experiment the treadler would remove a piece of paper covering the photoresistor. Simultaneously, the collector would transfer the outlet hose to the 20 L metered collection bucket. During the data collection, the treadler would attempt to maintain an average of 100 Watts. This was done by feel only and therefore resulted in some deviation from the target power. The experiment ended when the collector signaled to the treadler that 20 L was reached, at which point the photoresistor was covered and the data collection complete. The data was collected via a MATLAB program and saved after each trial. 15 trials were completed: three at each meter interval between 1 and 5 meters. 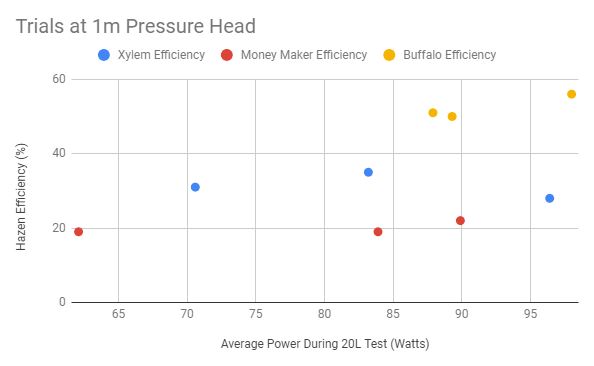 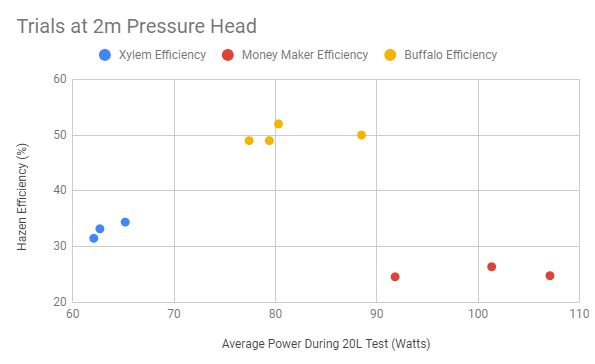 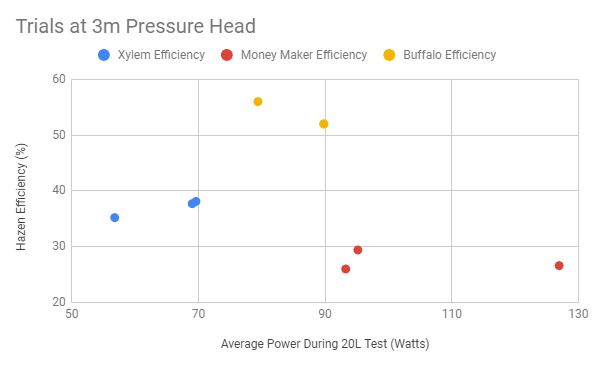 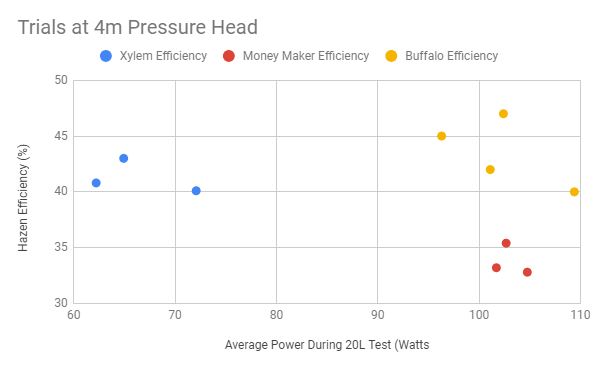 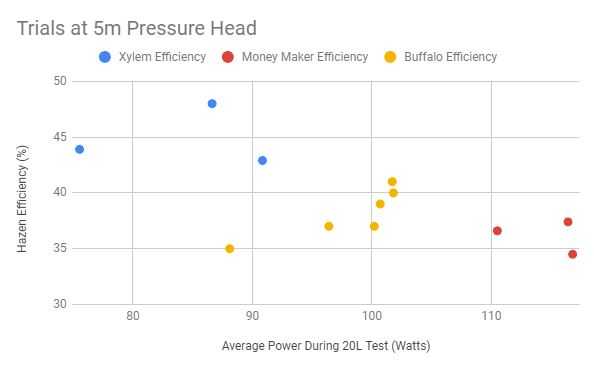 The figures 4-8 above show the calculated efficiencies for each pump at different pressure heads across all trials. The average efficiencies are graphed in figure 9 below.

Figure 9 shows the efficiency trends across different pressure heads for each pump. The average efficiency was found by finding the mean across the three trial tests at each pressure head. The effect that the variation in power may have had on efficiency was assumed to be negligible. The trendlines and corresponding equations are shown.

Until the correlation between power and efficiency can be determined, these conclusions include an error assumed to be negligible. It is within the best interest of further research to try and describe this correlation, which may appear something like this:

For low C values (<<1), our assumption can be considered valid. Our current assumption is that C=0, where efficiency is not a function of power. It would also be beneficial to direct further research at determining the range of pressure heads most frequently encountered in real world irrigation situations. This information will be critical in determining which human powered water pump is the most efficient for its given application.